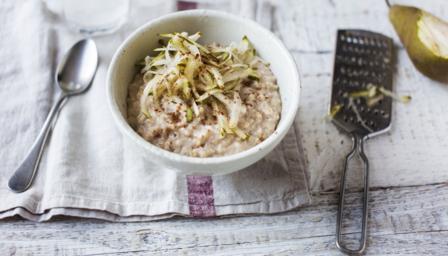 Prep time less than 30 mins
Cook time less than 30 mins
Serves 2
Dietary Vegetarian
by Justine Pattison
This porridge is made with water and skimmed milk to keep the calories low. A little ground cinnamon makes it taste sweeter without adding calories and it is topped with juicy grated pear. As part of an <a href=_http_/www.bbc.co.uk/food/collections/intermittent_dieting_recipes__Intermittent.html diet</a> plan, 1 serving provides a half portion of your 6 daily vegetable portions, 1 of your dairy portions and 219 kcal.