Thai noodles with cinnamon and prawns 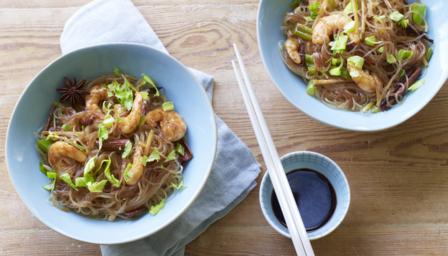 Prep time less than 30 mins
Cook time less than 30 mins
Serves 2
by Nigella Lawson
From Simply Nigella
It’s not often that I eat something that tastes so different to anything I’ve come across before. But this is such a dish. A mesmerically talented chef called Tum cooked it when I was on holiday in Thailand last year, and I made him cook it again and again. I just had to share this spectacularly unfamiliar but compelling recipe with you. I hope you will be as bowled over by it as I was.

Thai noodles with cinnamon and prawns