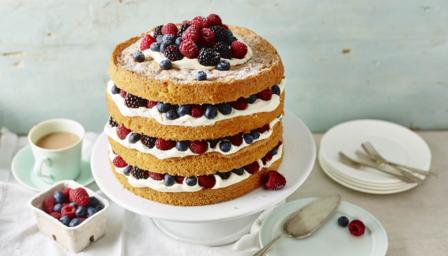 Prep time over 2 hours
Cook time over 2 hours
Serves 16
by Mary Berry
From Mary Berry's Foolproof Cooking
Big, bold and beautiful, this summer party gâteau is a real show-stopper. Add more fruits or even flowers for a very special occasion. You’ll need to make the sponge mixture in two batches as it does not work whisking all eight eggs at once.

For the Genoese sponges