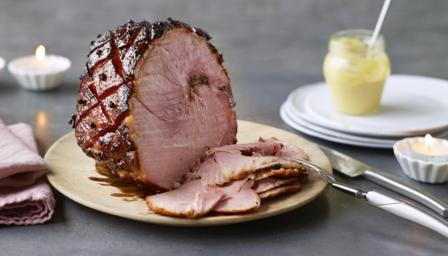 Prep time overnight
Cook time overnight
Serves 10-12
by Nigella Lawson
From Simply Nigella
Instead of being boiled and then transferred to a hot oven to be glazed, I cook the ham so, so slowly, in the oven, wrapped in foil, so that it steams sweetly in the low heat. I then remove the ham from the oven, take off the rind, stud the layer of fat on top with cloves and cover with a mustardy black treacle glaze, and put the joint briefly back in a very hot oven. Cooked like this, the meat is astonishingly tender and carves into thin slices with ease; there is also very little shrinkage, and no wrangling with large joints of meat in boiling liquid.