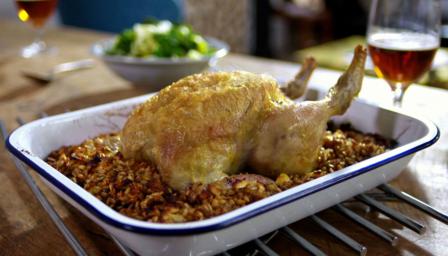 Prep time less than 30 mins
Cook time less than 30 mins
Serves 4-6
by Hugh Fearnley-Whittingstall
From Food & Drink
Fruity spelt brings an inventive twist to classic roast chicken in this dish. Serve with kale and leeks for a healthy Sunday roast. This meal, if served as six portions, provides 520kcal, 56g protein, 46g fat (of which 6g sugars), 12g fat (of which 3g saturates), 4g fibre and 0.6 salt per portion.

For the spelt mix

For the kale and leek