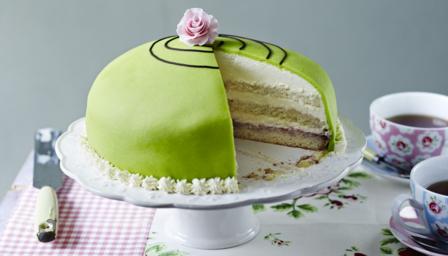 Prep time 1-2 hours
Cook time 1-2 hours
Serves 12-16
Dietary Vegetarian
by Mary Berry
From The Great British Bake Off
This Swedish layer cake is great fun - bright green and full of custard, jam, marzipan, and a mound of whipped cream! Equipment and preparation: for this recipe you will need a piping bag with a 1cm/½in plain nozzle, a medium star nozzle, a 23cm/9in springform tin and a sugar thermometer.

For the vanilla custard

For the fondant rose