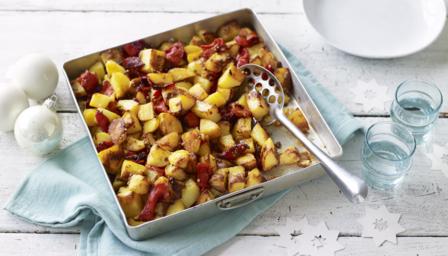 Prep time less than 30 mins
Cook time less than 30 mins
Serves 8-10
Dietary Vegetarian
by Nigella Lawson
From Simply Nigella
I never feel the need to apologize for using jars of chargrilled peppers, for while I don’t eat them just as they are, I find them the most useful ingredient. Just make sure that you are using peppers that are preserved in oil rather than brine. The potatoes don’t roast in this oil, so much as braise: they will crisp up in parts, but mostly just become softened and rich in the sweet peppery juices.