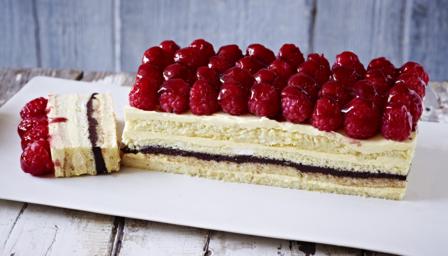 Prep time less than 30 mins
Cook time less than 30 mins
Serves 8
Dietary Vegetarian
by Mary Berry
From The Great British Bake Off
A joconde sponge is a decorative almond-flavored sponge cake made in layers. Opéra gâteau is an elaborate version of it, here made with kirsch syrup and a chocolate ganache. Equipment and preparation: You will need a 33x23cm/13x9in Swiss roll tin and a free-standing food mixer.

For the kirsch syrup

For the joconde sponge

For the chocolate ganache

For the crème au beurre