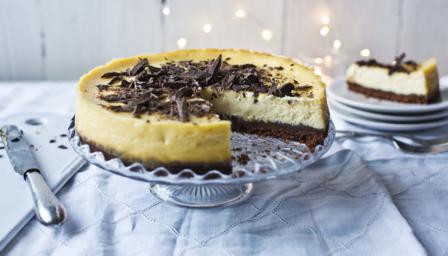 Prep time less than 30 mins
Cook time less than 30 mins
Serves 8
Dietary Vegetarian
by Mary Berry
From The Great British Bake Off
This wintry ginger and chocolate cheesecake is perfect for jazzing up the dessert selection at Christmas. If you want to make life a little easier for yourself you can simply grate chocolate on top of the cheesecake instead of making the decorations.