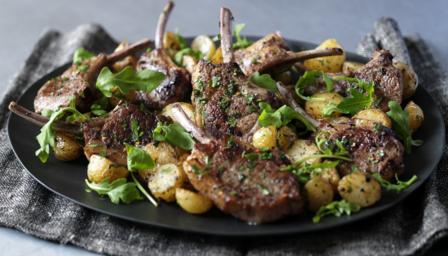 Prep time less than 30 mins
Cook time less than 30 mins
Serves 4
by Nigella Lawson
From Nigellissima
If you put your halved baby potatoes on to steam before you get started on the lamb chops, you can fairly effortlessly rely on a proper meat-and-potato supper in around 20 minutes (plus a little marinading time). Steaming the potatoes is, for me, an important stipulation: a steamed spud is a sweet spud; more than that, cooked this way, rather than by boiling, the potatoes are dry when done, which makes them easy to fry to crisp bronzedness.