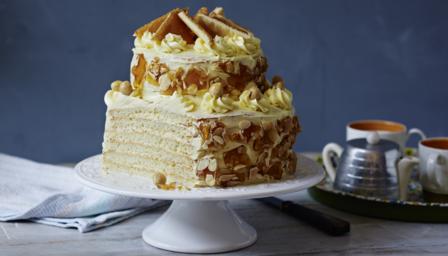 Prep time 30 mins to 1 hour
Cook time 30 mins to 1 hour
Makes 1 large two-tiered cake
Dietary Vegetarian
by Mary Berry
From The Great British Bake Off
Mary’s twist on this Hungarian cake has a full twelve layers in two tiers and is covered in caramel buttercream. Equipment and preparation: You will need a piping bag fitted with a medium size star nozzle.

For the caramel buttercream

For the sponge cake

For the caramel, praline and hazelnut decoration